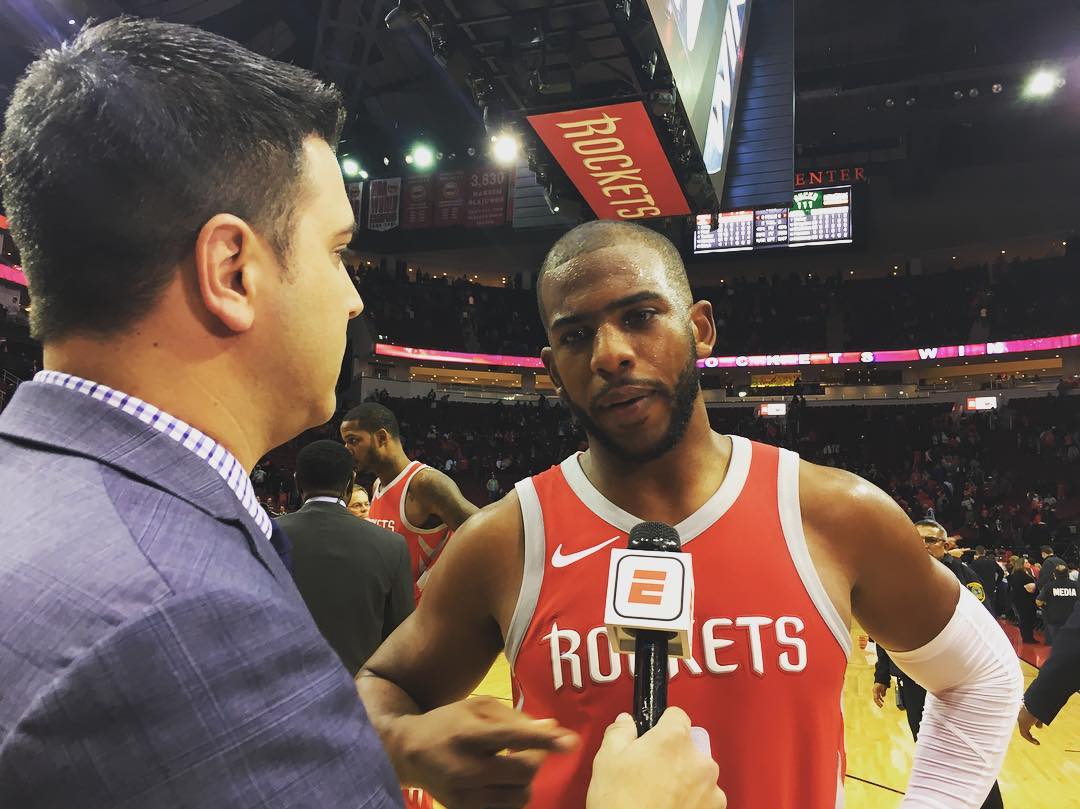 Stefano Fusaro is an Emmy Award-winning journalist from Miami, Florida that has had the opportunity to cover a variety of different sporting events through his career. Some of the past events that he has covered include the FIFA World Cup, as well as multiple Super Bowls and NBA Finals.

Fusaro is a graduate of Florida International University with a degree in Broadcast Journalism. Throughout his college career, he was able to gain industry experience at a young age by interning for numerous sports departments.

Before landing a position at ESPN two years ago, he spent two years as a sports anchor at NBC 6 in Fort Lauderdale covering the Miami Dolphins, Marlins, and Heat. Before that, he worked at Univision, where he profiled some of the biggest sporting events in the business. Such as multiple Super Bowls, World Baseball Classics, and the 2014 FIFA World Cup. Fusaro would win an Emmy Award for his work with the Miami Heat during their 2012 Championship run.

I recently had the opportunity to sit down with this award-winning journalist to discuss his passion for storytelling. He wants to use his platform as a reporter to inspire others around the world.

How old were you when knew that you wanted to pursue a career in sports journalism?

I was young; I think I was 18 years old at the time and going to college. This was something that I wanted to pursue. I played basketball and soccer growing up but suffered a knee injury that needed two surgeries.

After that, I knew I needed to head in a different direction because being an athlete was not in the cards for me. My father was in the television business and was involved in boxing, as both an agent and an analyst. Sports has always been in my blood, and it was something I have always wanted to pursue.

You are a graduate of Florida International University how do you feel their program prepared you for ESPN?

It prepared me as far as television is concerned, with the work experience that I gained. I felt it was vital. I had the opportunity to work at local stations since I was 19 years old, working in their sports departments. I think this job experience is vital, to make sure you know how television works. College prepared me for the tv side of the business.

I majored in Broadcast Journalism and took print journalism classes, but I wished that they had put a little more emphasis on print journalism so that students can get familiar with it. Based on that, I decided to take more classes at another university.

How do you feel beat writing has helped individuals transition to broadcast journalism on television?

It does help, but there is a difference between both mediums. You are trying to engage two different audiences, and I think when you are on television you are looking for a great quote to catch the attention of your audience.

You are focused on something in the locker room that other reporters might not have seen, rather than telling a full story of something that happened behind the scenes. Print journalism and television have different tasks, and I think colleges and universities should emphasize the differences between the two. In this business, you must be versatile and be able to transition quickly to obtain your goal.

What advice would you like to share with someone that did not take the traditional route of trying to land a position at a notable platform?

I think nowadays it is a lot easier in the sense that if you are good at creating content, and have an entertaining personality, you can create something on your own. As far as trying to promote yourself, nowadays you might have to invest some money. With social media platforms like Youtube, Instagram, Twitter, and Snapchat. I have met numerous individuals who have taken advantage of those platforms to build their brands.

You can create that for yourself nowadays, and if you are producing great work, you will eventually attract the attention you are seeking. Networking plays a significant role in this business, but like I stated if you are talented you can start to create a respectable platform. It will not happen overnight. Continue to improve your craft, and it will happen.

During this year’s NBA Playoff run you had the opportunity to travel to OKC, Houston, Utah, and Golden State. Can you describe what that experience was like for you being able to take in the atmosphere in each area?

I have been fortunate enough to cover many NBA series over the years, but I do a little bit of everything with basketball always being my passion. I profiled the Miami Heat during the LeBron years, which was an absolute blast covering their runs. Never have I covered a playoff run as I did during the past two seasons with the Houston Rockets for ESPN. I was able to travel to all the away games until they were eliminated both years. It was a significant experience, but a lot of work. It required a lot of hours traveling and trying to obtain the information needed to broadcast to the public before and after games. The atmosphere is excellent you can be an anchor behind a desk and make excellent money, but if you are a reporter and truly breath the game you are covering, there is nothing like being in the arena.

How do you want to use your platform to inspire others around the world?

I am a little bit of an old-school guy that genuinely enjoys excellent storytelling. I would like to do long-form pieces for television or print that will tell the backstories of the athletes. Regarding the struggle that they had to endure to achieve their dreams. I may not be the wittiest, although I try to be, I stay true to storytelling. I want to inspire others through the magic of storytelling and show that if an athlete can do it, so can they.

What has been your toughest assignment either at ESPN or NBC 6 in Fort-Lauderdale?

I would have to say covering the death of Jose Fernandez when I worked for NBC in Miami. I knew him and outside of work as we had some mutual friends. We also ran into each other at numerous events around the city of Miami, and that was the toughest assignment I had in my career. During the whole process I had to fight back the tears granted we were not the best of friends, but I knew him. His situation also hit close to home because my family had some similar experiences when trying to make a better life for ourselves.

You consider Marc Spears of ESPN The Undefeated one of your mentors, but who are some other your see as mentors in the business?

There are individuals in the business that you will recognize from television who have mentored me over the years. For example, Ramona Shelburne is someone that I have spoken to a lot over the past year and a half getting advice on certain things. Marc Spears is someone that has done the same, but my very first boss in the business was Manny de la Fe at Univision 23 as a 19-year-old intern. He was the sports director at Univision 23 in Miami he is now the coordinating producer at ESPN in Bristol, and he is someone that has forever been a mentor to me. I think it is critical for a young journalist to have someone that you can call for tough love, and bounce ideas off of.

What is the best advice someone has given you and who was it?

Man, that is tough, but probably Manny. He has always instilled in me to be confident in what you are doing, and he would say “If you do not have confidence it is the first thing that comes across the screen when everyone sees you on television.” You must dominate the opportunities that are presented to you or people will see that are not confident.

Out of all your interviews which two did you learn the most from and why?

I would have to say Dwyane Wade in 2012, helped me a lot I had the opportunity to interview numerous people before then, but he was my first big time interview. He was also someone that I grew up watching. I was able to learn quite a bit when covering athletes, and you must be confident because they will challenge you on your knowledge of the game and history. Another was with Rocket’s coach Mike D’Antoni I had the opportunity to speak with him before Western Conference Finals, and I was supposed to have a certain amount of time, and I was given less. I had to decide what I wanted to ask him for our segment for Sports Center. It taught me how to improvise on the fly and let me know things will not always go as planned.

Everyone is quick to say LeBron is leaving, but have you thought about possibly bringing Chris Paul, and Melo to Cleveland next season?

No! Not a whole lot and I think Melo will opt into his contract because he is owed 27 million and he will not get that anywhere else besides OKC. I think LeBron will assess things and conclude that there is more talent in Houston than bring Chris Paul to Cleveland. Plus, there won’t be much recruiting between LeBron and Chris they are best friends, and Chris is the godfather of one of LeBron’s children. It will be more along the lines of LeBron wanting to come to Houston, and Chris Paul will be the first one to know.